Eunice Kuo Metalwork Ltd. Is founded by metal artist- Eunice Kuo (aka Ying-Hsien Kuo). She graduated from MA Jewellery & Metal at the Royal College of Art in UK. Eunice’s work focus on the essence of life, such as questioning “Dasein” and paying attention to the mind of flow of human beings. Her projects have obtained many awards and exhibitions around the world, showcasing not only in UK but also in Switzerland, Lithuania, Vienna, Netherland, Japan and Taiwan etc. Eunice has been selected as an artist in residence at the Glasgow School of Art for a year. She shaped herself in the way of thinking and making throughout her stay and developed her first series of commercial jewellery. Eunice extended her passion in minimalism to her own brand. She started to participate in UK trade fair as Eunice Kuo Metalwork since 2015 and established the company in Taiwan in 2018. Eunice gain inspirations from visual contrast in life and metaphysics. In her opinion, jewellery should be seen as a strong character like small sculpture rather than just a body adornment. She wishes to spread and flourish the beauty of simplicity and minimalism to people via Eunice Kuo Metalwork.

One of a film from Eunice's conceptual project. 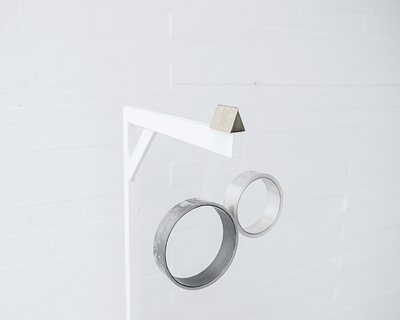 Installation- "Falling" from project "No more tears, tear no more"